Five years of conversations on our six orange chairs

|In Uncategorized
|By Megan Groundwater

There’s not many people who have been at Orange Sky longer than Maryam Clarkson.

She started volunteering in Melbourne back in July 2015 and has managed the entire service – consisting of two laundry and one shower van – since 2017. With more than 250 volunteers in Melbourne, Maryam has looked after one of our busiest services across the country in her role as Service Leader (which, by the way, is completely voluntary). From scoping out new shifts and doing risk assessments, to rostering volunteers and running our Orangetation (‘orientation’) training, there’s not a lot she hasn’t done in her time with Orange Sky.

Maryam has decided to hang up her Orange Sky shirt and take a bit of a break from volunteering after five and a half years of service to her community. She chatted with us about her Orange Sky journey and some of the lessons she’s taken away from her time spent sitting down on orange chairs.

“At the start of 2015, my youngest child entered primary school. I gave myself a couple of months to recuperate, after having three kids at home for so long, then I started looking for something to do. It so happened to be the time when Nic and Lucas were heading down to Melbourne to start Orange Sky.

I had previously volunteered at the primary school my kids were attending. I thought volunteering was an integral part of a community’s survival. There is so much unpaid work that occurs behind the scene and is not often acknowledged.

My first shift was in July 2015. It was at St Mary’s in Fitzroy on a Monday morning and I was a weekly volunteer to begin with. There were a lot of people wanting to volunteer and not many friends, but the service eventually picked up and we saw the same characters come back again and again.

Early on in my Orange Sky experience, I met a woman at the Batman Park shift. Our conversation started off like most others, but it soon turned to her letting me know that she had just miscarried. Only a week earlier. I was dumb struck, not knowing what to say to her. There was no fixing that moment. I would often tell this story [at Orangetations] that sometimes it is just good to be with someone on shift and not try to ‘fix’ things for people.

I had been volunteering for a year when the opportunity came up to be the ‘Appbassador’ – a job where I had to visit every shift, roll out the tablet in each van and show volunteers how to use it (Orange Sky tablets are used to track the journey to and from shift, to capture wash and shower numbers, and measure conversation hours). I went to Brisbane for the Volunteer Summit that year in 2016 and met all the other state leaders.

Then an opportunity came up for the Service Leader role and I thought that I would give that a go. I did fear that I may not be able to do it, but I wanted to stretch myself. I am so glad I did. Man, have I learnt a lot, grown a lot and really loved the role. It has been really tough at times with having to deal with difficult situations, but we got through and learnt from these. I have loved working with and supporting all the volunteers to enjoy their experience helping others.

I will miss feeling the importance of my role and the interactions with volunteers. Getting that good feeling when you’re on shift helping people and knowing that what I was doing was making a real difference in people’s lives. I will miss the connections with all the people I have met over the five and a half years; from the staff at HQ, to my fellow volunteers and especially the friends I met out on shift each week.

Conversations are so important. They make you feel connected, important and worthwhile. Email conversations; just don’t cut it. They lose the personal touch of a tone of voice, a smile and warmth. Everyone needs to connect to others. It is in our human DNA.”

Volunteers like Maryam, who give their time in support of the community, help to make Orange Sky a place where our friends feel welcome, connected and safe. We can’t thank Maryam enough for her contribution to our Melbourne service and wish her all the best for a well-deserved break.

Pictured below is Maryam’s final shift in Melbourne on December 25, 2020. 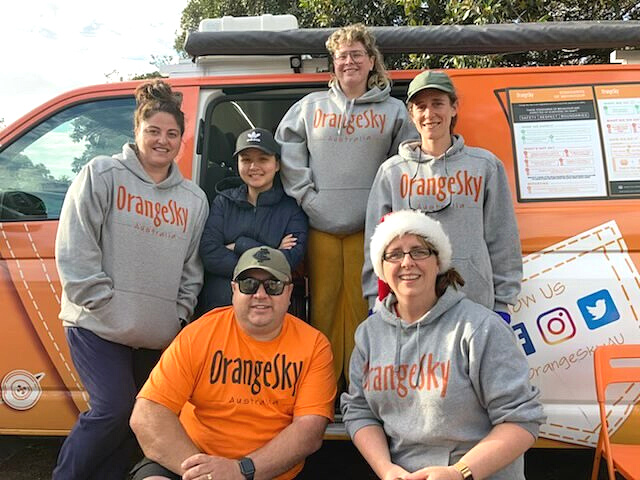