How We Created The Laundry Pod

|In Uncategorized
|By Megan Groundwater

In its short history, Orange Sky has become known for its imagination and innovation. And at the core of every piece of innovation is always a very simple, yet crazy idea.

The origins of this particular idea was no different from ones which preceded it, despite it being hand-scribbled on a QANTAS travel sickness bag by our Co-Founder, Nic.

It was mid-2019 (before phrases like ‘pandemic’ and ‘social distancing’ had become part of our vocabulary) when Nic hopped off a flight and told me that he had an idea. He pulled a drawing out of his back pocket and started to explain what he had scribbled down; a fixed box-like structure that would house three washers, three dryers, and six orange chairs. 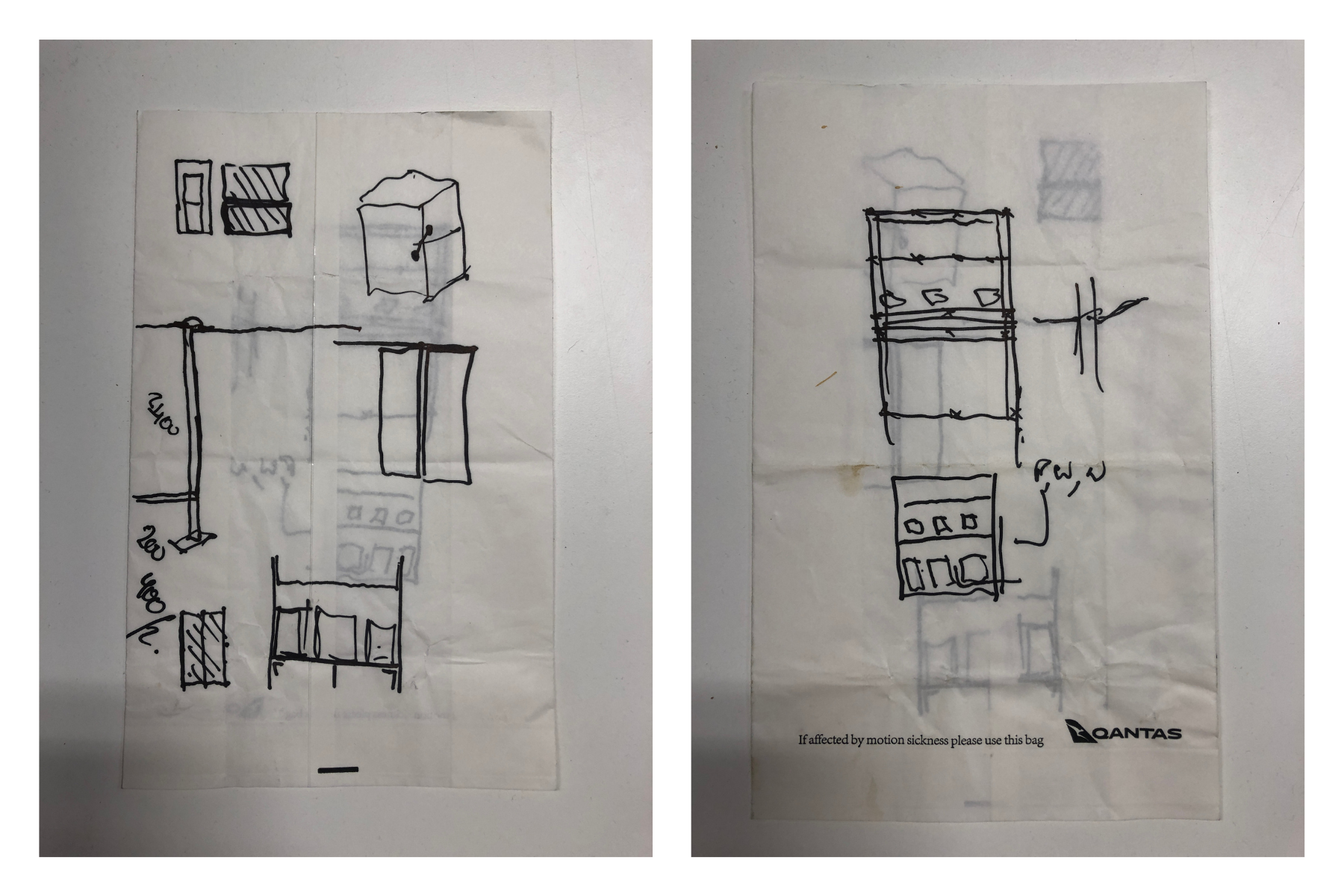 At this point in time, Orange Sky was operating 30 vans across Australia and New Zealand. The beauty of our vans is that they can cover large regions to help as many friends as possible, but we’d come to understand that in smaller areas, a van with an on-board generator was an unnecessary resource when our shift locations were within walking distance apart. Nic’s idea was to explore what a reduced-cost operational model looked like for Orange Sky, with the vision of being more accessible to operate in less-populated regions more efficiently and with simplified maintenance demands.

We got to work quickly on what we had named the ‘Laundry Pod’. I drew up some rough plans for us to work from, and we built a prototype unit in one day. The purpose of the prototype was to give us an idea of the pod’s spatial requirements, as well as an understanding of how we could best design our electrical and plumbing infrastructure. Once our prototype was built and reviewed, we started to get serious about the idea and began to engage relevant consultants and manufacturers to take the idea to the next level. 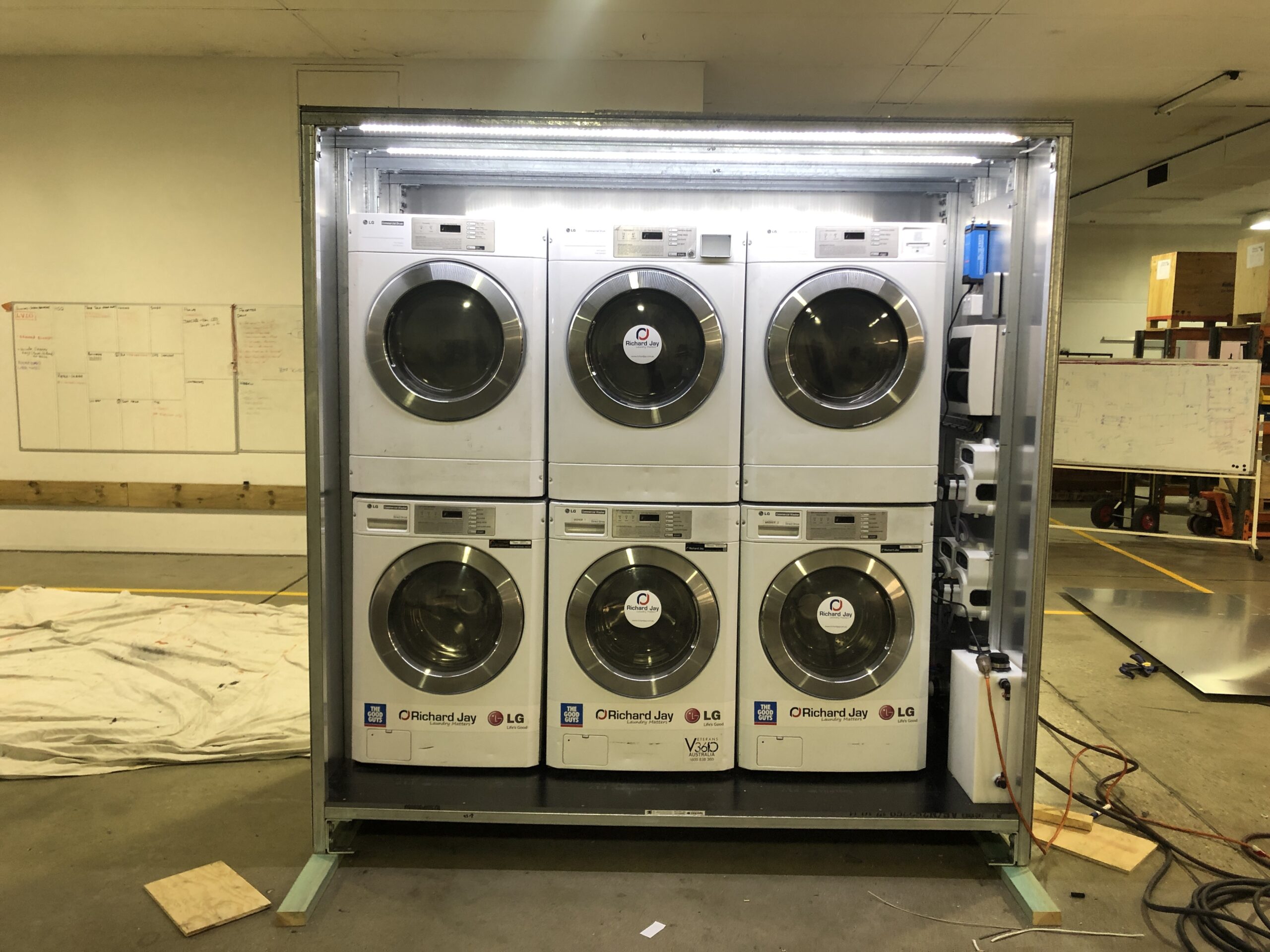 Working in collaboration with CSM Service Bodies, we designed and manufactured three custom-made cabinet-like structures, which would soon become our first three laundry pods. The completed cabinets were delivered to Orange Sky’s headquarters (HQ), and our team got to work on installing the systems and infrastructure into the pods that provides power, water, and liquid detergent to the washing machines and dryers. The fit out took about one day per pod, which is significantly less than the time it takes to fit out one of our vans. Soon after the pods were built and tested, it was time for the first pod to leave HQ and make its way up to its new home in Sarina, on the outskirts of Mackay, Queensland. 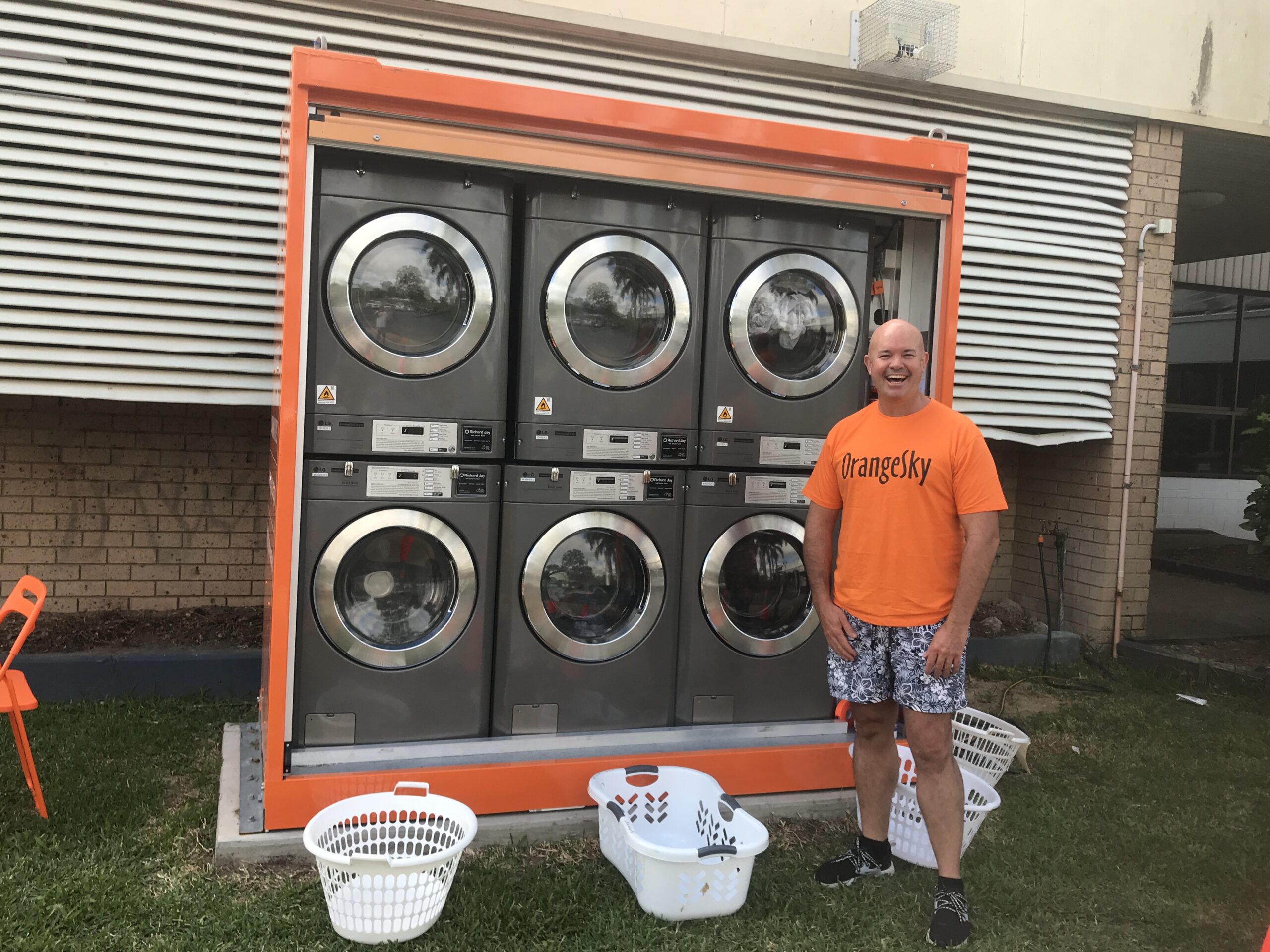 The first pod in Sarina has now been in operation for nearly 12 months, and a second pod has been installed in a central location in Mackay. We’ve also recently partnered with Beddown in Brisbane for an eight week pilot to provide friends (who are using Beddown’s services) with access to free laundry and conversation through the use of our laundry pod.

It’s been amazing to see how a simple idea has progressed into something that is now making a real impact in the community. That’s why innovation has, and always will be, part of our DNA at Orange Sky.

If you have an idea you think we should explore or a location that you think a pod could work, we’d love to hear from you!